Learn how to import your script and some best practices for screenplay formatting.

Did you finish writing your script and now looking to import it into StudioBinder? Follow these instructions to get you started.

Importing your script will make it convenient to access anytime and will give you the ability to tag elements, create shooting schedules, shot lists and storyboards.

Note: Users on the Free plan will be able to import 50% of their script so they can demo the software. To import an entire screenplay, you must first subscribe to any of the paid plans.

Watch this video to see how to import your script, or read the text below 👇

Note: If you do not see the Shooting Schedule feature, you must first enable it in your Project Features. 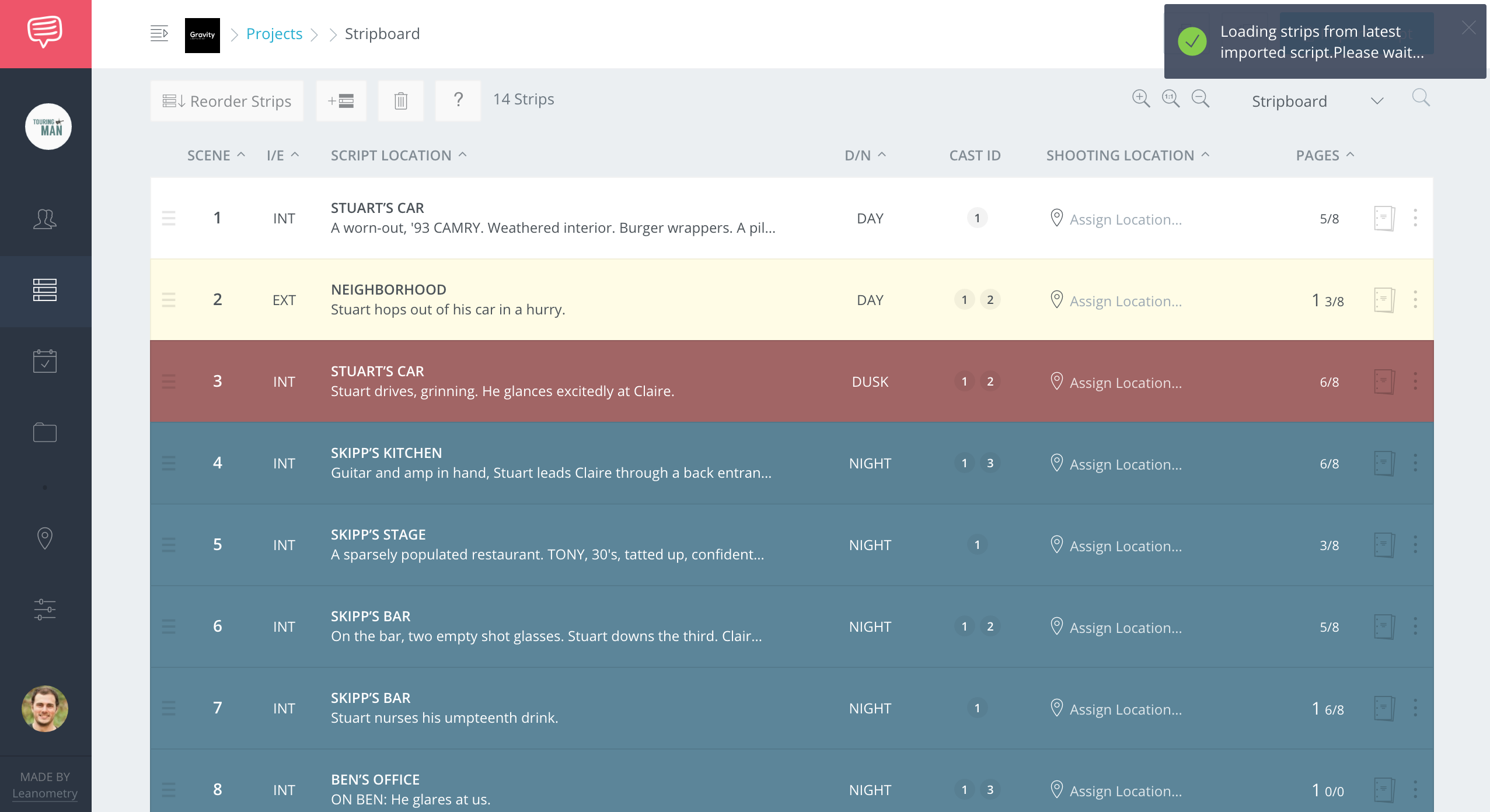 Tip: You can use WriterDuet to convert your screenplay to a .fdx file.

Why did only half my script import?

If only a few of the scenes in your script imported, this is because you're subscribed to the Free plan, which only allows you to import 50% of your screenplay. To import the whole script, you must be subscribed to a higher plan.

What format can I import my screenplay in?

You can import your screenplay if it's a PDF, .fdx, or .fountain file. There is no need to convert it to another format before importing to StudioBinder.

Why does it only import 1 scene?

If you are importing a multi-scene screenplay and it only imports 1 Scene, this is most likely caused by a formatting error. For example, if your Scene Heading is not marked as such in the scriptwriting platform that you're using, then it will not consider it a "Scene" when you import. In addition, we suggest importing a script that's in .fdx format since this contains the most amount of metadata and will ensure Scenes are broken up properly.

Are the pages automatically divided into 8ths?

What happens when I import a new version of my screenplay?

Why are my scenes or page numbers not showing after I imported my script?

Before you import your screenplay into StudioBinder, you should Generate scene numbers in Final Draft. This will help avoid having to edit each strip manually.

Tip: If importing isn't instant, there may be script formatting that must be resolved prior to importing.

Best Practices When importing your Screenplay

Are page lengths included when importing a .fountain file?

Currently, this is not supported.

What if I get a revised script? 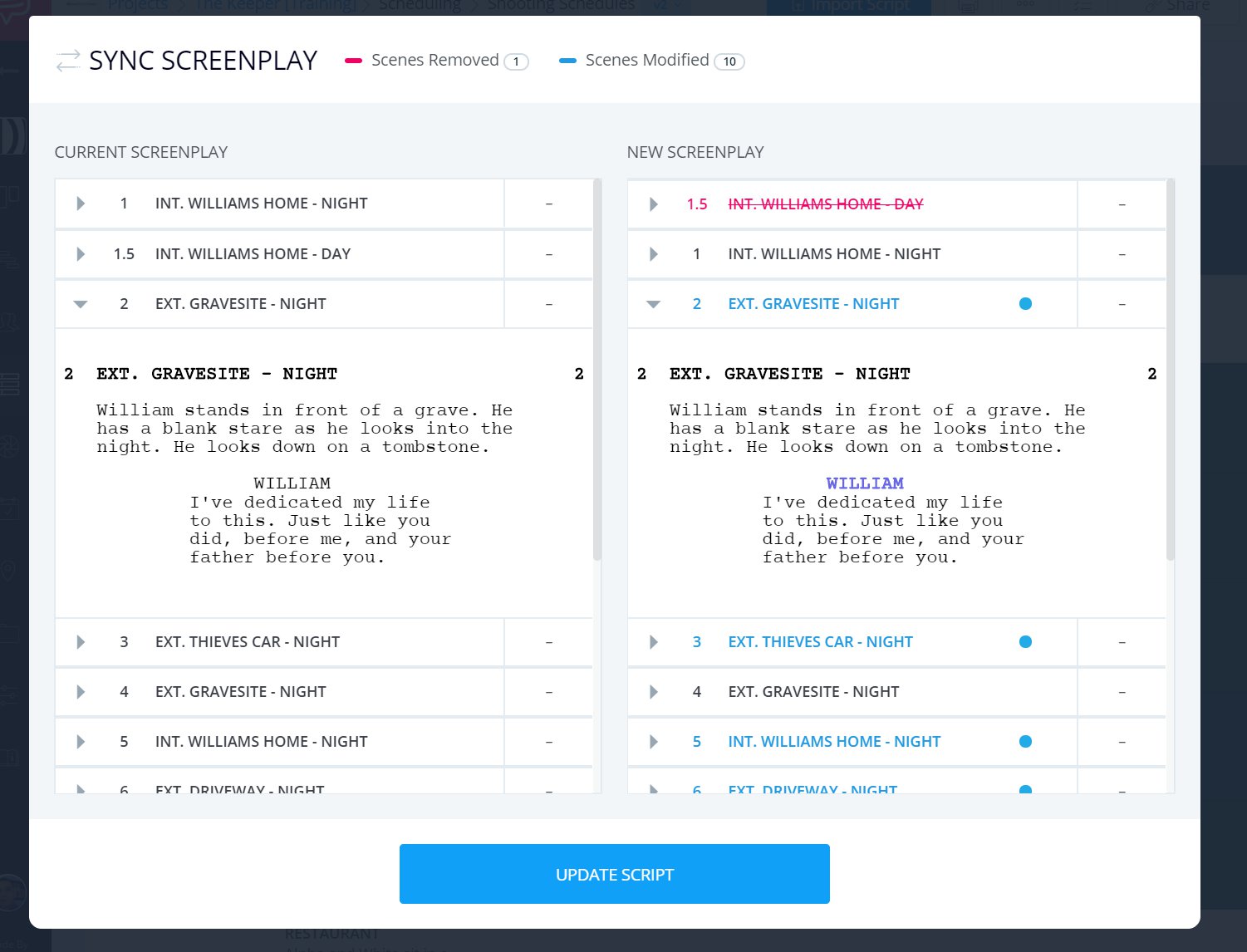 Why aren't your scenes syncing?

When you import your revised script and it replaces all the old scenes with the new one instead of syncing, this could be due to the Scene Numbers not matching.

Only some of my scenes synced, why?

If only a portion of your screenplay synced, this is most likely due to your Scene Numbers not matching. To avoid having to start all over with tagging elements, it's important to ensure that the Scene Numbers match from your previous screenplay.

Can I go back to a previous version of my screenplay?

You can always swap back to a previous draft using version history.

Can I manually edit a screenplay?

Yes, from the Stripboard, click on the scene you want to edit. This opens the Edit Scene Strip window. You can make changes to the script, and the scene heading.

If I re-import a script, will my shots be attached to the wrong scenes?

When you import a new screenplay with screenplay sync, it will simply add the newly modified scenes to your Shot List, and it will not move shots to other scenes. However, if you added shots to the Imported Scenes List, they will be associated with those specific Lists. This means that if your Scene Numbers changed, those specific shots will be available on the previous Version. In a nutshell, it will not wipe your shot list clean if you re-import, along with any script elements.

Is it possible to 'turn off' Screenplay Sync?

You sure can! When you import your script, just toggle to 'Don't Maintain Changes' which will treat the import as a fresh script. Keep in mind that this will completely remove stripboard ordering, along with elements that have been tagged in this Version.

My shot list is no longer synced with my stripboard after updating the script, is there any way to re-link?

The reason that your shots are not appearing any more with the previously associated scenes is due to the Scene Number changing. Revisit your script and ensure that the Scene Numbers are the same, that way, when you sync your screenplay changes, it will maintain your shots as well.

Can I sync a PDF script?

Yep, this is totally possible! As long as the Scene Numbers are the same, it should sync successfully.

How do I add another script to be broken down without replacing the previous one?

Simply follow the steps above to sync your script revisions when you import another version of your screenplay.

Review the Sync Screenplay Window to verify changes that will take effect when importing a new draft.

Note: A Sync Screenplay window will appear displaying what scenes were removed or modified once a new draft is uploaded.

Is there a way to update the script without losing existing breakdowns?

That's correct! If you use Sync Screenplay, it will preserve the tagged elements on your account.

When syncing a new version of the script, I've lost all tagged elements apart from cast members.

Great, now that you imported your screenplay, it's time to: